JustApril
Texan transplant interested in too many things to list them all - All avenues of art, music, photography, fiber....etc.

Those of us who were fans of that PodCast went through a period of mourning when Dave just couldn't do it anymore. But guess what? He's going to be at it again soon. He's going to be starting a new PodCast called FirstLife. I can hardly wait to get my greedy little hands on it!
To find out the details and pitch in some encouraging words.... CLICK HERE!
GO Dave!
Posted by JustApril at 5:40 PM 5 comments:

Where in the World have I Been?

Sometimes time just gets away from me. I was a bit sickly for a couple of weeks, then one of my friends came to visit, then we went to visit her in return along with everyone else in that area. So I guess it's been busy around here.

As far as I know, I haven't knit a single stitch since my last post. My brother is doing some interesting knitting, though. With very little instruction and his own ingenuity he has figured out interasia and put it to amazing use. I keep telling him to bring it over so I can photo it in the daylight, but we always manage to get together when it's getting dark. It's turning out really cool, though. He's using cotton that has perfect sheen and in colors you wouldn't expect in a baby blanket, and he's putting the Queen's Reich symbol big and bold in the middle of it. He's making it for a friend who just had a baby. It may just turn out to be the coolest baby blanket ever =) I'm proud of him. I may have taught him to knit, but he's taken off in directions I haven't gone, so it's fun to see what he can do.

Work is going decently well. Things are picking up after the initial Summer slowdown. Someone called me Magic Fingers and marvelous yesterday - lol

I do have pictures in my camera, but I'm too caffiene deprived at the moment to hook it up. We got the satellite guy here now hooking us up with TV. I've held out for... nearly 14 years, refusing to get cable or satellite TV since regular TV eats up too much time already. Our digital receiver though is just awful. The picture is fine, but the guide it uses stinks, most of the channels say "No Information Available" and it's just a pain in the butt. Anytime you want to look at the channel list, it stops receiving the channel it's on and flips to the guide only. I guess it can only think about one thing at a time. Also, we had two DVR's that died within a couple weeks of each other and a major lightning strike. So that was sad, too. We'll be getting a new DVR with the TV deal.

Oh yeah, as for Claudia, she was number 1 again and her ride went very well. yaay

I think I need coffee - talk to y'all later =) sooner rather than later I hope
Posted by JustApril at 8:36 AM 1 comment:

Probably everyone that reads this blog also reads Claudia's Blog but just in case a few extra people wander over there b/c of this post... I figured I'd mention her and her MS Ride Fundraiser. She's only got a few days left before she rides and she's only got 38% of her goal and it would be so awesome if she could retain her #1 status of last year.

You see last year, knitters (and regular people) all over donated to her ride to the extent that she had the highest total of anyone there. That's cool

Of course there are also tons and tons of awesome prizes. All a person has to do to get put into the drawing is donate $10. There are so many prizes that the odds of winning one is very high, and it's super nice (mostly knitterly) stuff. But doesn't everyone know at least one person they like that knits? Well, hopefully if you are reading this blog, that's at least a little true. ;0)

Posted by JustApril at 8:21 AM No comments:

Seven Years Ago Yesterday, According to the Pelicans

Have you ever had one of those really peaceful days that seemed to be almost like a dream? Several years ago, seven to be exact, we had one of those days. It was a Sunday. We went to our meeting in the morning, went to visit my husband's 'Gammaw' who was in the hospital, and then went home and lazily put together a new swing set for the kiddos. Well, one kiddo was still too young for it, which is how I recall exactly how many years ago it was. My daughter had been born the previous December, and we were in the month of April at the time.

While we were assembling the swing set, the most amazing thing happened. Droves upon droves of huge birds were suddenly migrating over our heads in complete silence. It was one of the most majestic scenes I've ever witnessed in real life. They were flying astonishingly low, compared to the altitudes of the migration geese and ducks, and like I said, completely silent - also in contrast to geese and ducks. It was hypnotic. We just watched them in awe for at least half and hour, maybe more.

I had never seen this particular type of migration before, in spite of living in this general vicinity of Texas nearly my whole life. We weren't certain what they were, but considering their size, I thought they must be pelicans. But why were they headed over our area flying DUE North? Maybe headed to Lake Superior? I didn't know, and still don't know. ( I'm nearly sure they are pelicans, now, because since then, I've actually looked up pictures of pelicans in flight and they look exactly the same.)

We were all sort of under the spell of that sight all evening. Then the phone rang, and we learned that my husband's Gammaw (baby talk for Grandma, of course, so named by my husband when he was just a wee boy, and then everyone called her Gammaw forever) who had been doing very well just hours before had taken a sudden drastic turn for the worst. We rushed to the hospital, but were too late, she was already gone when we got there. It was particularly awful for my husband, since he was very close to her all his life. She had always kept him after school when he was growing up and as soon as he was old enough, he moved in with her to help take care of her.

We stayed at the hospital for several hours, quietly talking amongst family and friends, reminiscing and grieving, as you do in that situation.

By the time we were headed home it was seriously late, some time in the AM hours of the morning. I don't remember the reason, but we had one other stop to make before we went home, and on our way there we saw the most spectacular meteorite any of us had ever seen. To this day I haven't seen it's equal. It streaked across the sky right in front of us bright enough to to light up the whole sky in turquoise and then exploded fantastically in a blaze of glory.

We just looked at each other in amazement. I couldn't help but think what a wonderful gift it was to have two such wonderful memories, as if to ease the blow of such a great loss.

Usually, I can recall the exact dates of things that mark tragedy, but this isn't one of those crystal clear dates for me. Yesterday however, the pelicans graced us with their migration again. I hadn't seen them since that day, but I was very glad to see them again, and to reflect on that day, seven years ago, when they showed up, in my mind, to help us get through what was to be a very sad day indeed. 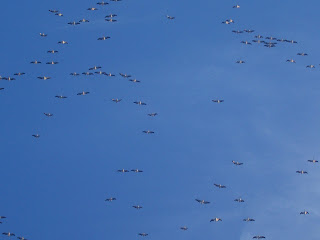 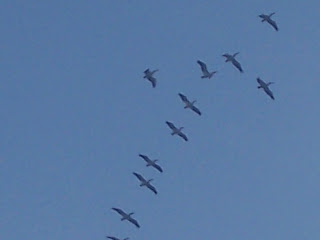 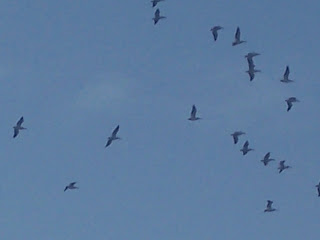 Ok, geek moment but here is a petition to save one of the shows I really liked this year. Not only was it canceled but they totally left everything hanging. SO frustrating.

....so if you happen to be a fan (or just want to do me a tiny little very easy favor) go sign the petition and hope for the best.

While you're clicking stuff - come see me at the blog with more pictures =)*)
Posted by JustApril at 9:27 PM No comments:

and yet ANOTHER contest!

This one is a bit different, because it's a win/win situation. Ya see even if you don't WIN the contest, you win by having a new source for awesome yarn!

Then be sure to check out her Etsy shop under the same name, NHKnittingMama